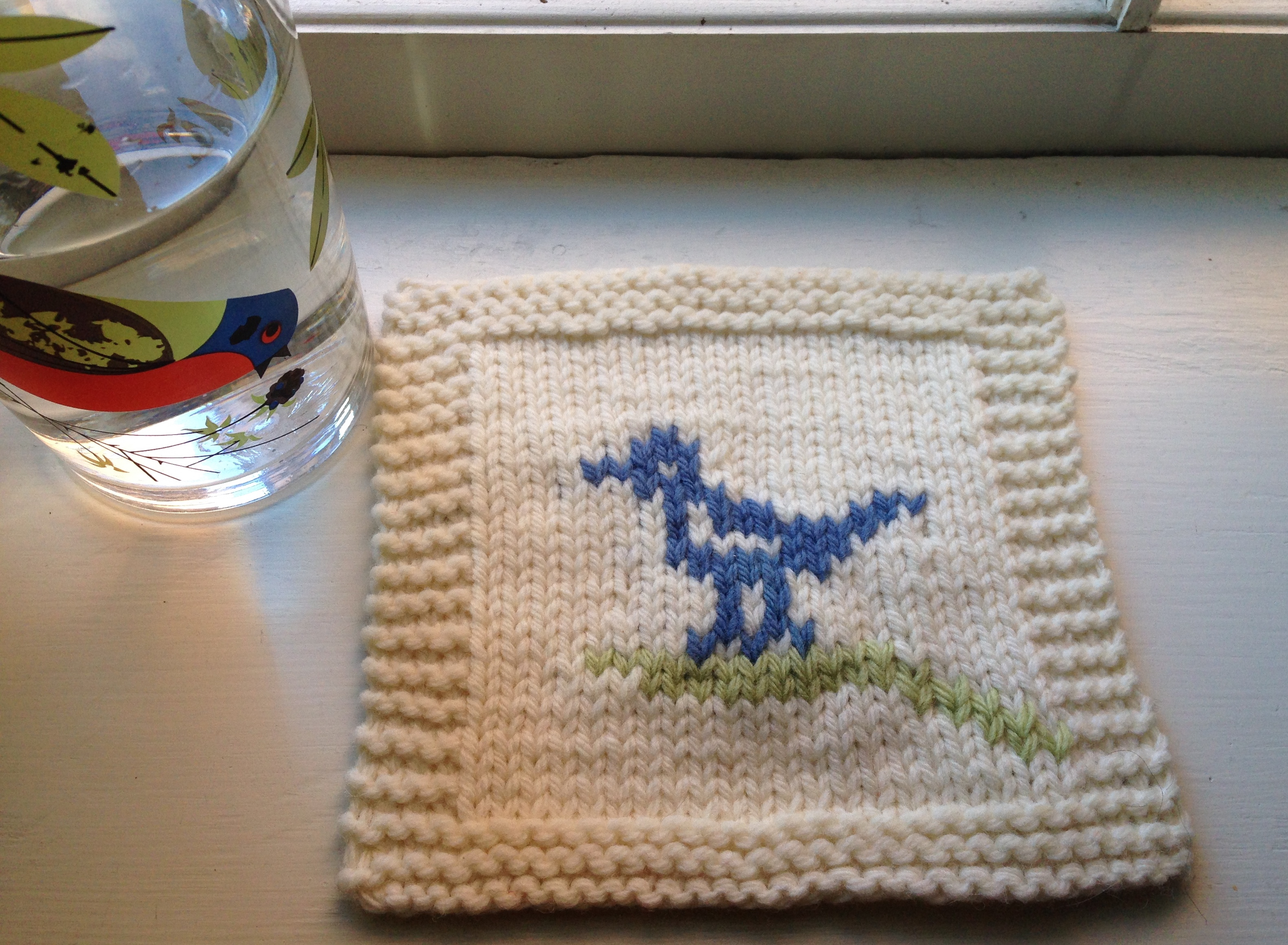 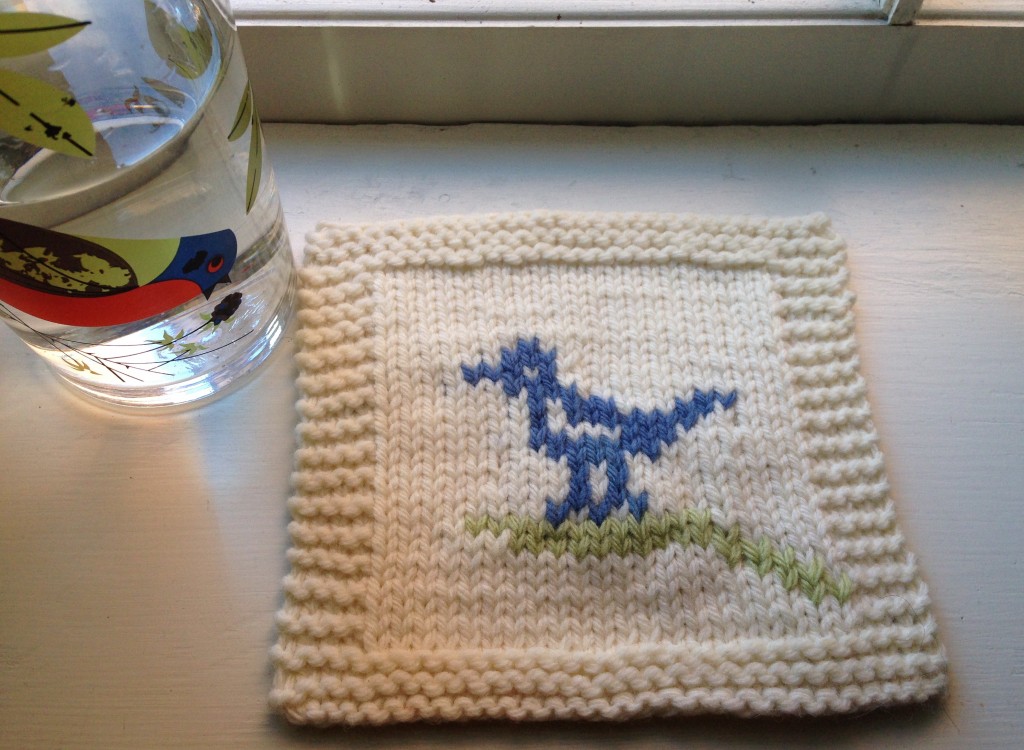 April is National Poetry Month. Inspired by a favorite poem, I knit a little coaster to celebrate the season. I used motif No.52 from my book 150 Scandinavian Motifs. Instead of knitting it stranded, I tried my hand at intarsia. I’m a little rusty and just off the needles it’s a bit bumpy, but I think it will calm down with a nice blocking.

I actually saw a cardinal today, sitting on a branch just outside my window, sweetly singing. The birds are different here in my new home in the city. I am making new friends and learning new songs.

The bird has come
to give the light:
from each trill of his
water is born.

And between water and light that unroll the air
now the spring is inaugurated,
now the seed knows that it has grown,
the root is portrayed in the corolla,
at last the eye lids of the pollen unclose.

All this was done by a simple bird
from a green branch.

For the coaster I used Quince & Co. Lark yarn. In egret, delft and leek. More specs on my Ravelry  page.

Iceland has been on my mind since Cirilia Rose has been instagraming from Iceland along with her buddy Steven West. You have to check out their photostreams – so entertaining!!! This picture of fish skin shoes had me remembering the time Gudrun and I spent at the Textile Museum up in Blönduós. It turns out that the traditional knitting of Iceland, or rather the antique knitting of Iceland, isn’t the ubiquitous Lopapeysa yoked sweaters, but  garter stitch insoles for fish skin shoes. I’d heard about these from Helene Magnusson’s fantastic knitting books, especially Icelandic Color Knitting: Using Rose Patterns.

While wandering the galleries, I was so enthralled with the insoles that the kind women at the museum offered to show me some of the collection not on display.

It is about time I shared them with you!

Here’s how they are stored. 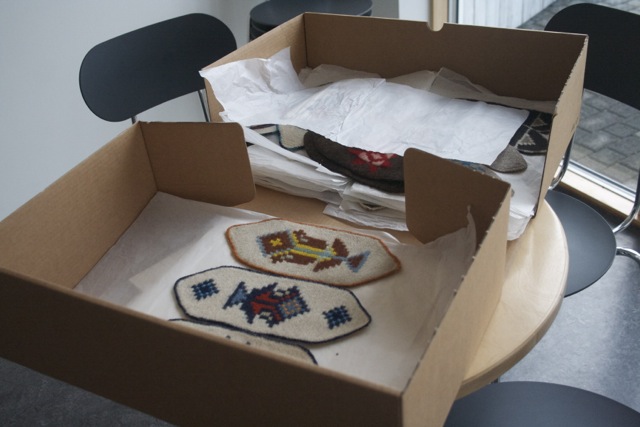 Ok that’s all for now, soon I’ll show you the shoes and some more examples.

I found these scattered across Peru, the one on the far left in Lima, the middle one in Cusco, and the one on the right in Aguas Calientes, by Machu Picchu; they are all typical men’s hats of the Cusco region. There are subtle clues which might let us know where they are from. The two on the left are very similar, notice the earflaps have similar patterning and are constructed the same way, only the one on the far left has been fancied up with buttons. The color arrangement of their top pompoms are identical.

The chullu on the right has a different earflap construction, the  center is knit downwards like the other two, but with a sewn on edging which matches the motifs in the diamonds above. It is perhaps my favorite hat, personalized with the name of the makers village, his own name and even his phone number – a sure way to get the girls!

Notice how many different colors are found in every row, each of them requiring a separate bobbin. I counted 34 colors in one row! The stitch gauge makes traditional fair isle knitting seem positively bulky! The center chullu has teensy tiny stitches-20 to the inch. The other two are 15 and 14 to the inch.

The technique for all three is what Cynthia Le Court Samaké named a “Corded Join”, inevitably there are several ways of doing it. The man I watched, didn’t knit at all, strictly purled…up to the cord, wrap and back around the other way, purling in reverse, never turning the work. The “Knitted Float Intarsia” I mentioned before, achieves the same result in a different manner, without the cord.

I’m practicing and trying to learn, but I feel all thumbs, which is helpful really, you use your thumbs a lot, makes it easier. Some of the people I saw in Peru were not especially fast knitters, but the ones who were – were blindingly fast – little bobbins bobbing along.

Read other accounts of “A New Skill”: google knitcroblo4