Spring is so early, daffodils, violets and the sky already filled with birdsong. I look and look through my binoculars, trying to locate the musicans, theirs feathered chests swelling with song. I only seem to spy the tiny silent ones, flitting near the ground, intent on their bug bussiness. The warm weather had me itching to be delinquent. I abandoned my current project and set to making birds, capturing with my needles, the elusive songsters.

It wasn’t entirely frivolous, I was testing an Andean technique I had observed, but not yet tried, a type of intarsia, which I think I shall call Knitted Float Intarsia….or something like that. Because that is exactly what they do when the yarn is on the wrong side of the motif in circular knitting. Only they usually purl, and they purl “backwards” to boot!

My bluebird is my first go at Knitted Float Intarsia, I was trying to adapt the technique to my style of continental knitting, which worked. A bit fussy, which it just plain is – however,  I have almost concluded may be easier to do the Andean way, purling, from the inside. You’ve got more control of your floats that way. Plus, when you loop the yarn around the back of your neck, like they often do, you can really make the stitches pop into place,  keeping the tension tight.

I feel like I’m learning to knit all over again. I was taught to knit when I was four, by a teenaged neighbor who promptly ripped out all my knitting when was time to take it off the needle. Much later, in college, I “learned again” although I found I already knew how. I “learned again” when I decided it would be much cooler to knit continental style. Now I’m learning the basics again a totally different way! 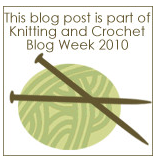 Google knitcroblo1 to find out more!