Countdown to the Stopover KAL! It begins just after midnight tonight – wherever you are!
If you sign up in my Ravelry group on the ••Stopover KAL – signups thread, by 11:59 pm Eastern time, which is just before midnight here in Portland Maine, you’ll be included in the drawing for the very first prize – 3 skeins of Léttlopi! That is also the time the special KAL promotion, of 10% off ends…so join up!

This is my very first KAL, so I’m not well versed in the art. Some people started the moment I posted Stopover, which is GRAND! I’m so happy, and they are NOT excluded from any of the fun. You can figure out time zones here. If you look at the ••Stopover – Talk About It thread, you can see some of the in-progress Stopovers, and the colors people have chosen. You’ll also see the trio of natural colors that are the prize for the first drawing. Winner announced tomorrow! 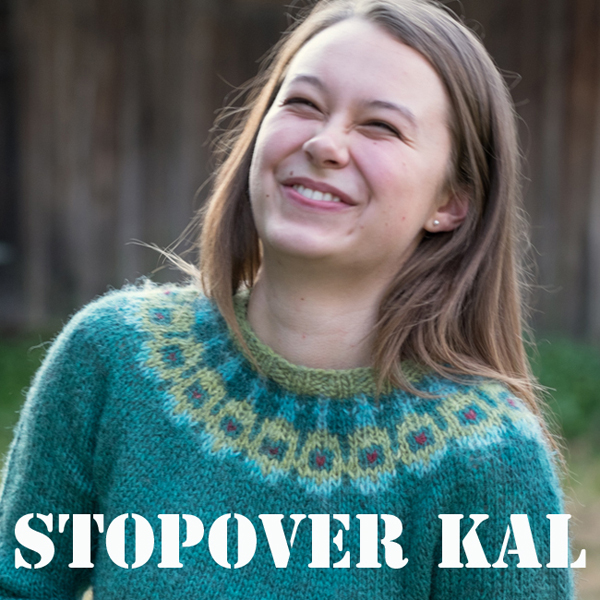 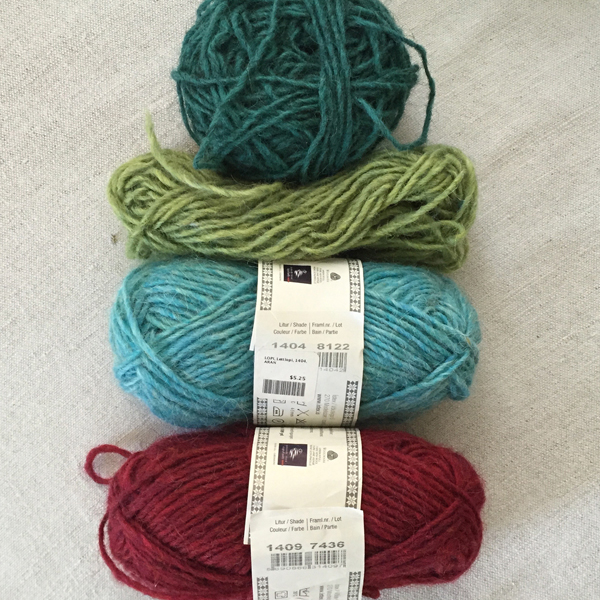 Which brings me to choosing colors! I get lots of questions…I suggest choosing a color you absolutely LOVE for the main color. Then grab another color you like, and decide which position you’d like it in. I’ve put the MC at the top, followed by CC1 for the Cuffs and Neckline, CC2, for the first color in the “peacock feather” motif on the yoke, and finally the accent color, CC3 on the bottom. 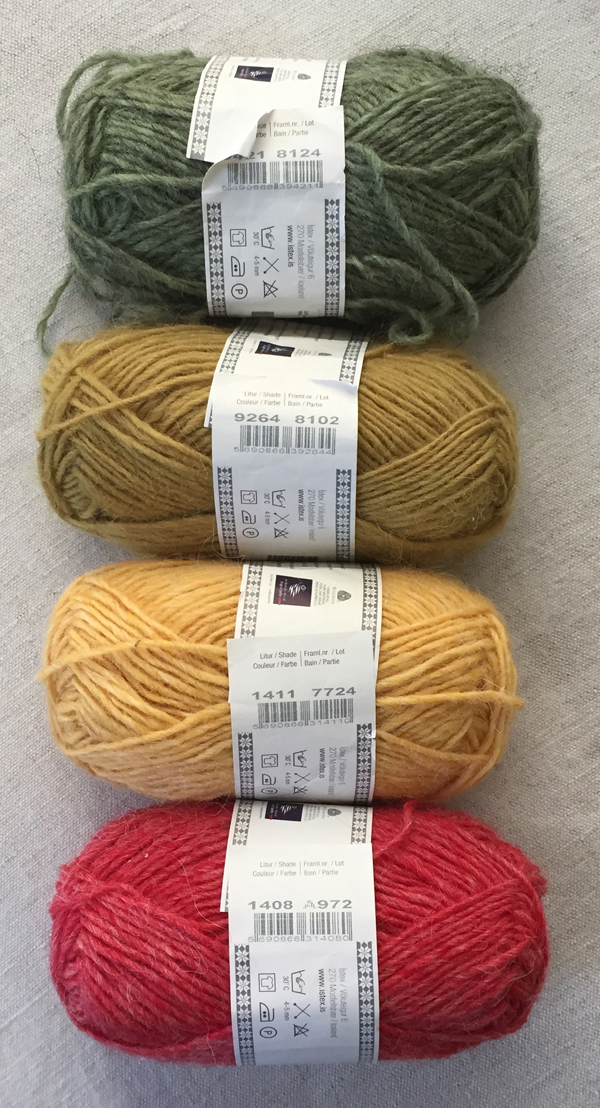 A friend of mine really loves the mossy green #9421, which I just happen to own a ball of, so I started trying out possible combinations with what I also had on hand. The combination on the left looks a like spring in Maine to me, the dead grass starting to turn green,the first pale yellow wildflowers and the little red buds on the maple trees…if I swap out the clear colors for heathered versions the look veers to autumn.

Pretending I don’t like fall colors had me swap out the yellow for grey, which made me think of lightening up the whole sweater, and have blue as an accent…And then I got to thinking about Grey Heather as the MC, with blue and red as the accents, inspired by the first finished Stopover. The black dot seems nice and graphic. 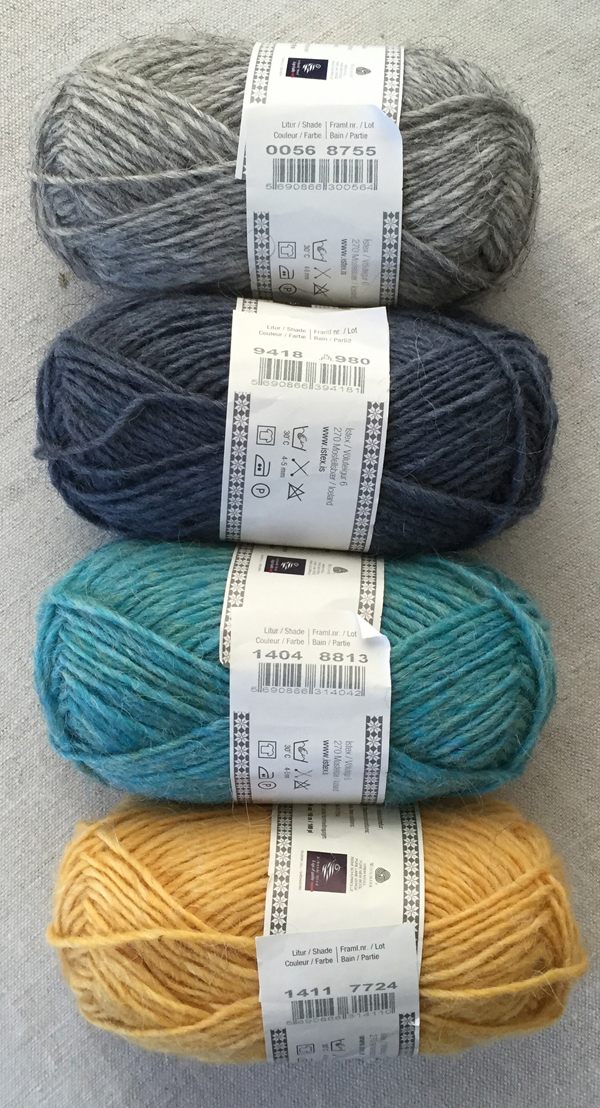 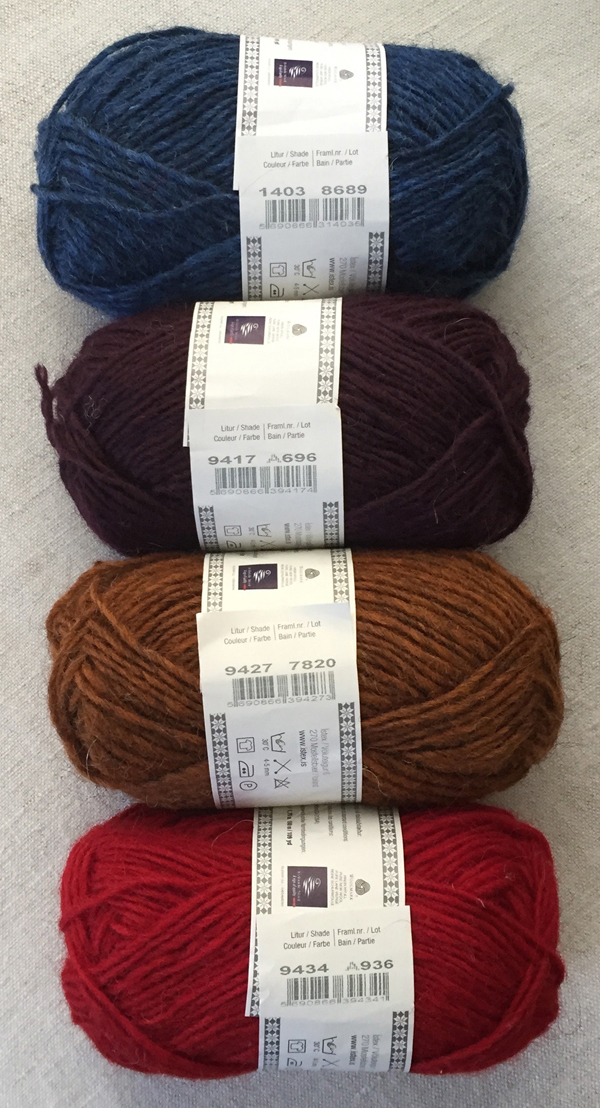 Maybe too graphic. Soften the transition and include a really pretty slate blue, and perk it up with glacier blue and a bright clear yellow, like an alpine wildflower. Too sweet? Use the dark blue as MC, but choose some unusual colors to go with, you can’t see very well in the image on the right, but the dark color #9417 is a gorgeous eggplant. I’m currently smitten with #9427 a rust heather and the red will glow like a jewel!

Ok so be bold and choose bright red for the MC, the cast on and neckline will be my current love rust heather, and then let’s continue being kind of weird and bring in that gold color, and now I’m back to that black dot for graphic punctuation. I can’t stop thinking of the eggplant color now, so how does it go with the rust heather, the weird gold and old favorite garnet heather…kind of pretty. Really rich. Much nicer in person. 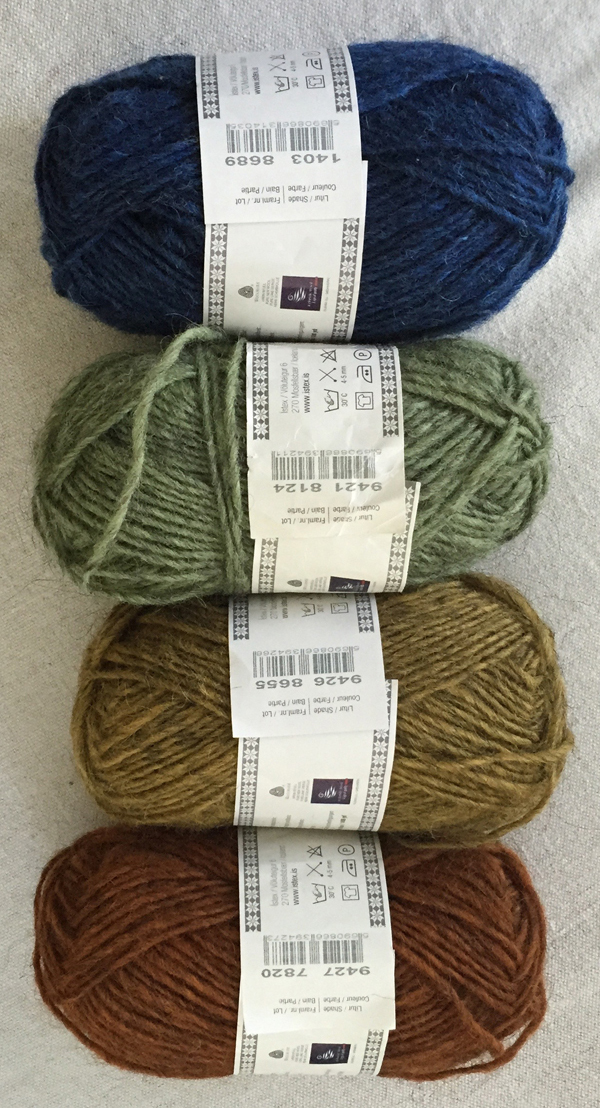 So since I think I like rust heather so much, how about feature it as MC…and add some of those fall colors, with deep blue like a mountain lake. Can’t commit to the rust? Try the blue again as the MC…You see? ENDLESS opportunities for fun! You may not even have to knit Stopover because you could just do this till the end of time. But I do hope you decide to knit it.

Can’t decide? There is no shame in knitting it exactly as the sample…that is still my favorite one!

But to sum it up:

Choose your favorite color for MC.
Choose two harmonious colors for CC1 and CC2.
CC1 will be the cast-on, cuffs and neckline.
CC2 is next to the MC at the end of the ribbing and cuff. It also forms the base of the “peacock feather” and the radiating quill in the yoke pattern.
Choose something unexpected for CC3, the single dot – you want to make sure it will hold it’s own against the MC, so make sure there is a difference in value with the MC, or that it is super-saturated and bright.
Have fun with it!

Find my Stopover pattern on Ravelry!

Confused where to donate? @neighborhoodfiberco is

I cord worm for your pleasure. @bichesetbuches Le


Error: API requests are being delayed for this account. New posts will not be retrieved.