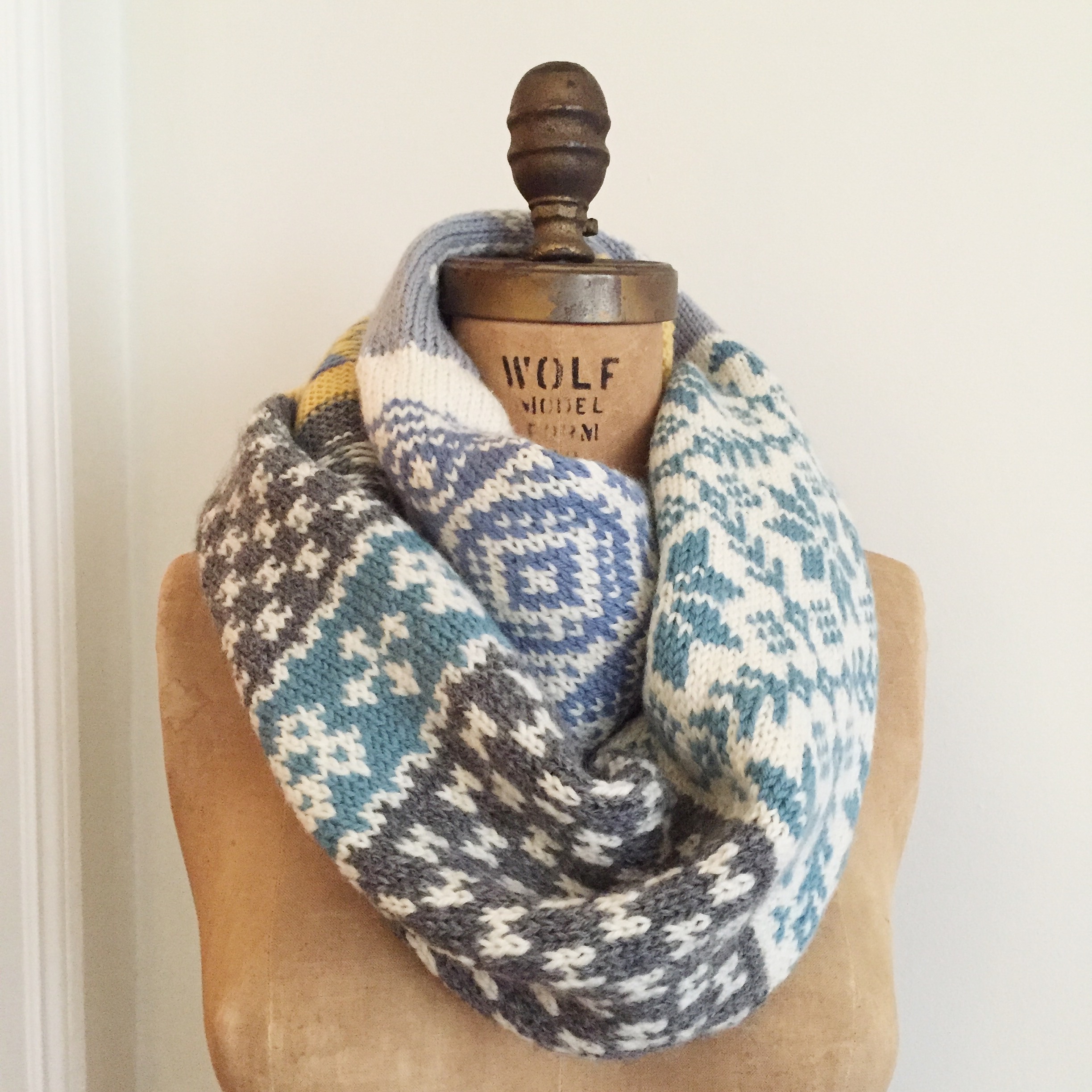 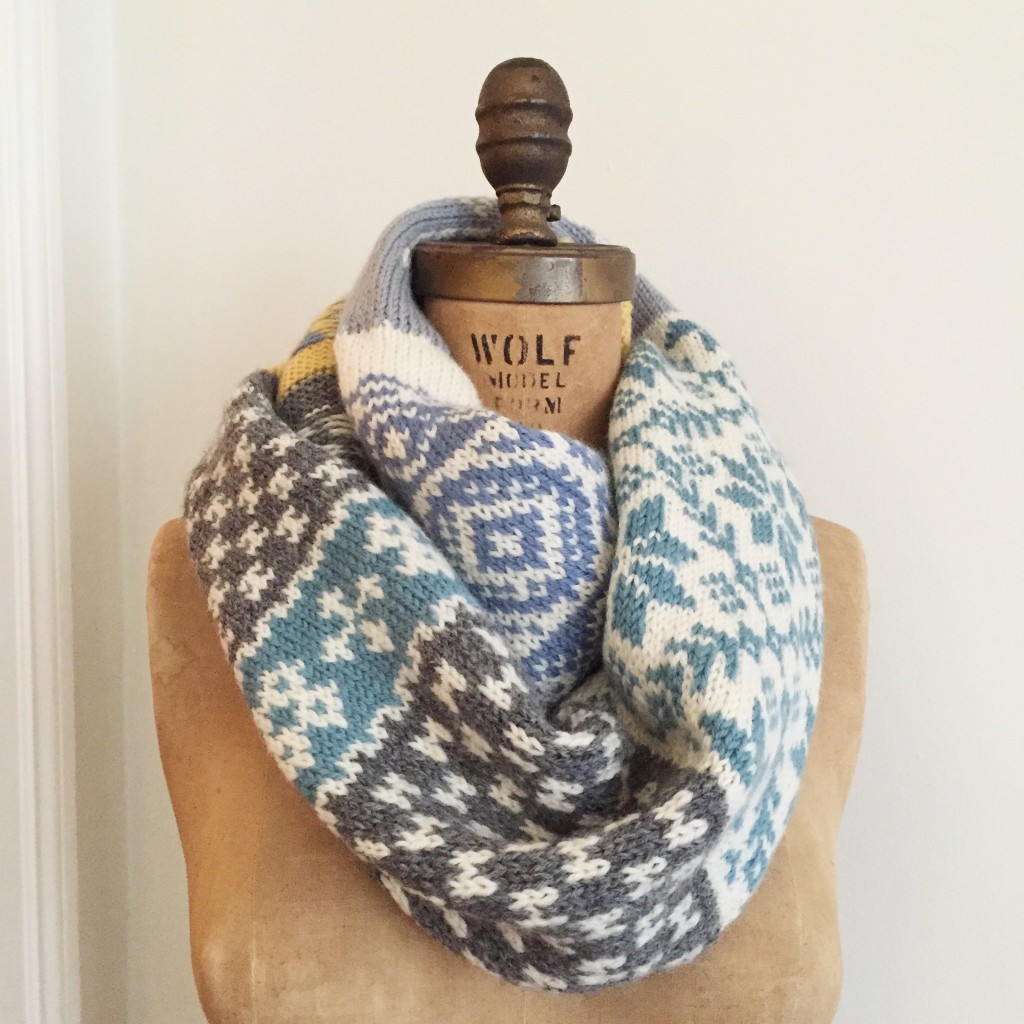 I’ve wanted to attend since I was in high school, so it is a real honor to be teaching.

In our week long workshop we’ll explore choosing and altering pattern motifs to suit this cowl project and many of your future projects. Plus everything else I can manage to cram in!!! This happens in an incredible rural location in the hills. The school was established in 1925 in part to keep alive the folk traditions of Appalachia, inspired by the rural folkehojskoles in Denmark.

There are totally amazing classes besides mine, lure your if non-knitting friend or partner to come along – pottery, jewelry making, music, printmaking, sewing, weaving, basketry, woodcarving, woodturning, rosemaling and what I want to take – blacksmithing – all with a Scandinavian theme!

Hope to see you there! 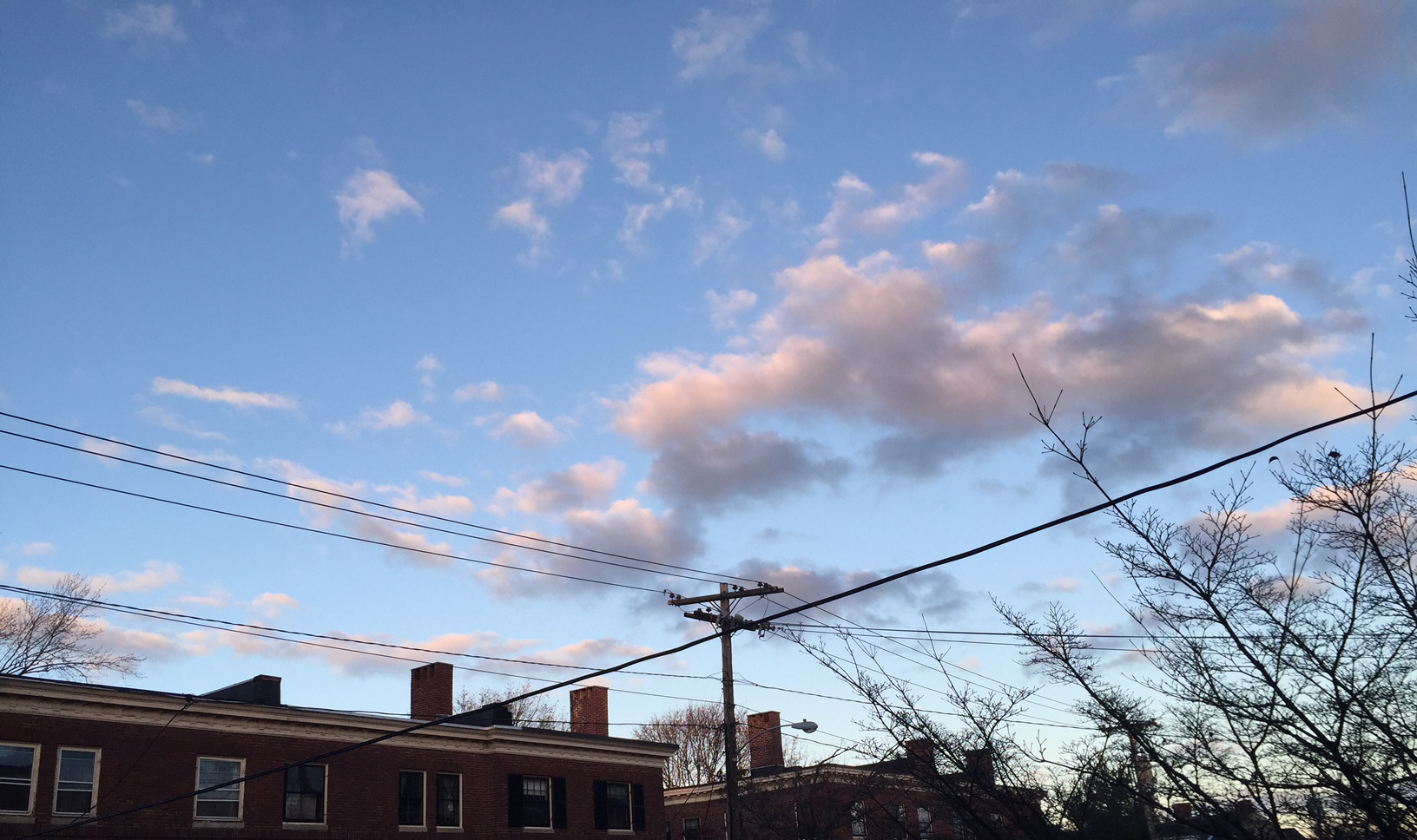 It’s the time of year when things should be slowing down here in the Northern Hemisphere.
It’s getting dark, and it’s getting colder.

For a lot of us, the pace of life just doesn’t seem to slow down like we’d like it to. But I urge you to try. If only for a moment or two. Give yourself some time to do absolutely nothing.

Once you catch a breath, you can begin to plan for future adventures. I’m lucky that my work takes me all over and I get to visit strange and wonderful places. Maybe I’ll be in your neck of the woods this coming year. I’ve posted a list of places I’ll be teaching  on my classes page. Some you might just be able to pop in, others might take a little more planning.

There’s a piece of advice I was given, that I come back to again and again when I veer towards panic and my head threatens to fly off –

Look at the sky.

Just look at the sky. 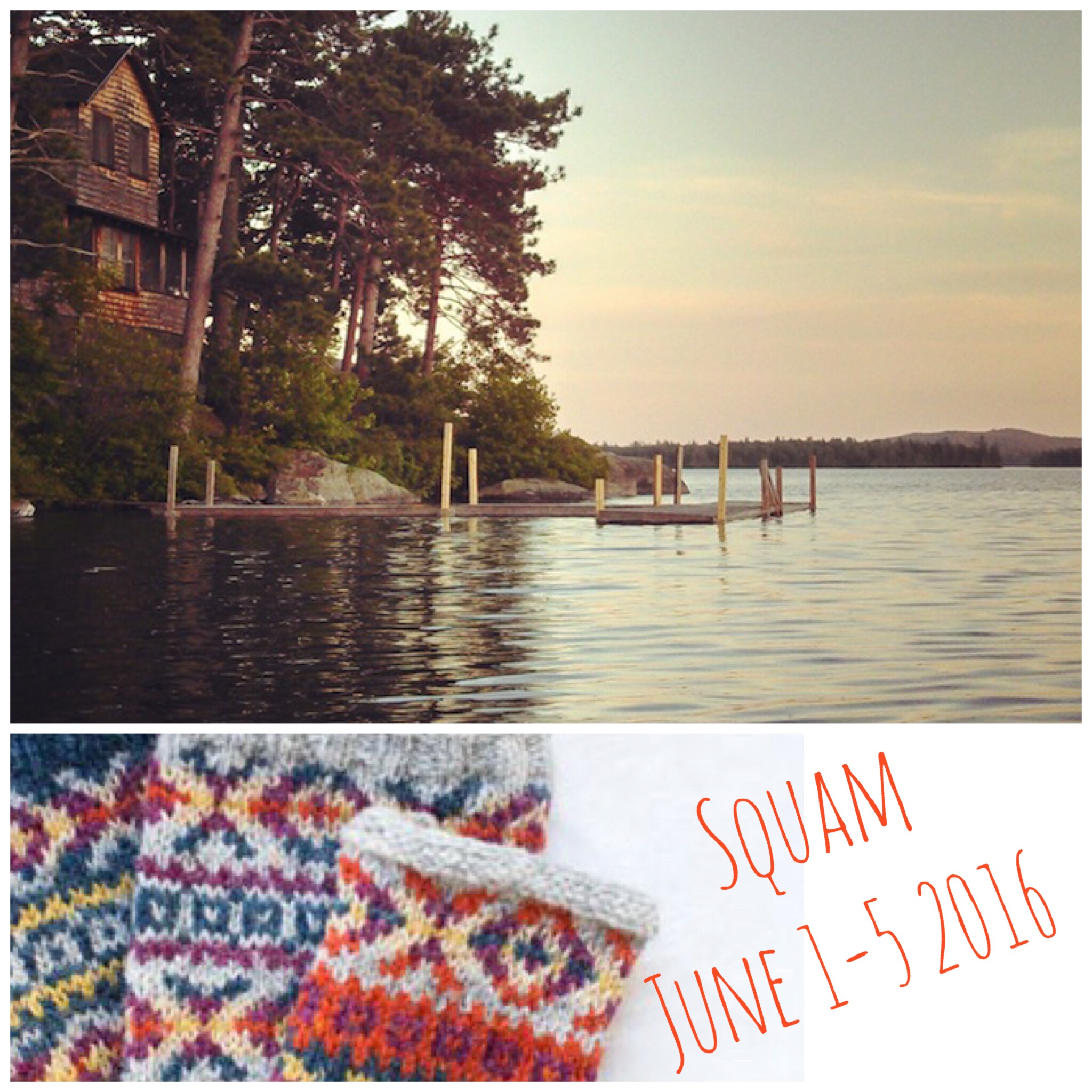 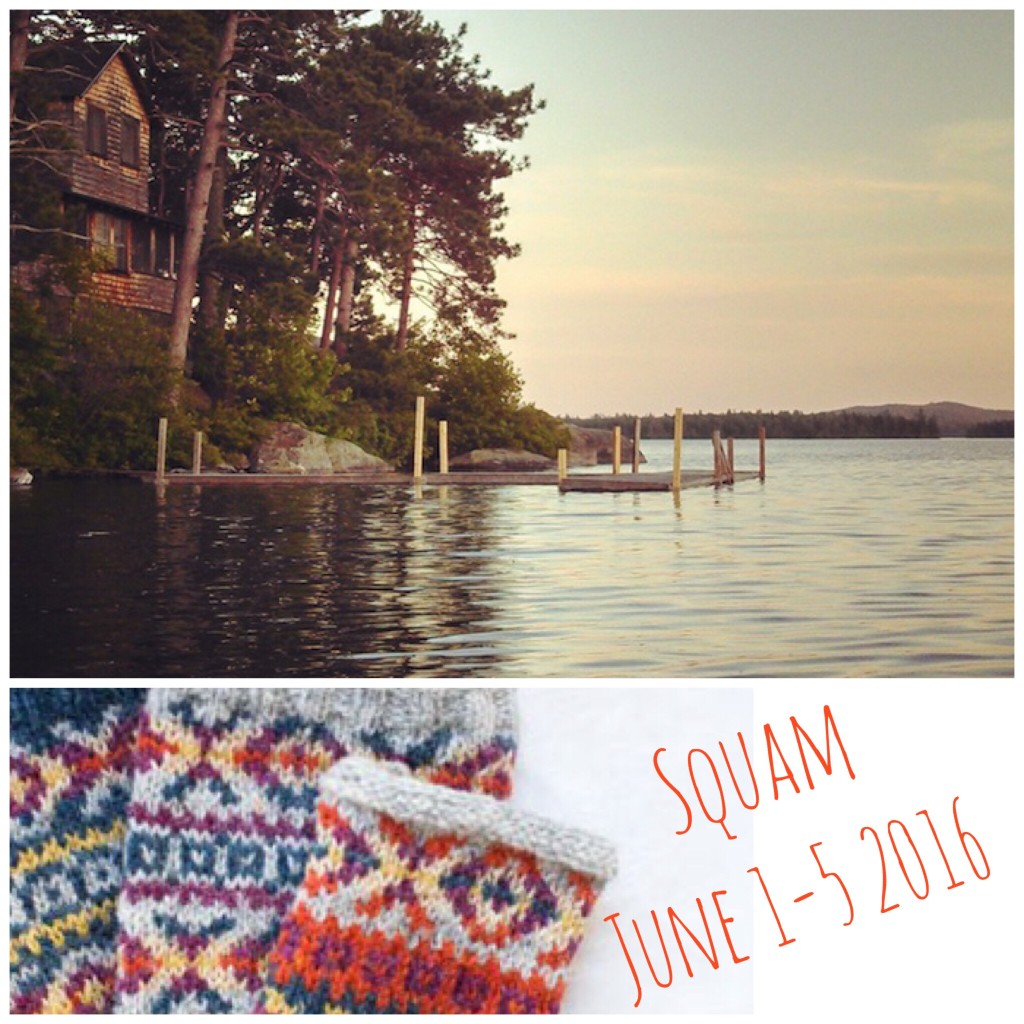 I’m teaching next spring in New Hampshire, at Squam Arts Workshops. Most of you will already know about this most fabulous of knitting retreats. It is one of my favorites because of so many things, but my favorite thing of all is the location. An old school New England camp. Guests stay in charming, old fashioned cottages, each with a screen door that slams, a rock fireplace and it’s own dock on Squam Lake.

The classes next spring are just so amazing. I honestly want to sign up for each one, only I can’t because I’m teaching. What am I teaching? A special Fair Isle Squam Style class…we will have so much fun – exploring Squam and forming ideas inspired by this wondrous place. We’ll bring it all into our knitting, making our own special fair isle cuff, to capture our experience. A fair isle totem!

My companion knitting teachers are favorite friends, my fellow Grand Shetland Adventuress Gudrun Johnston, west coast friend Andrea Rangel – such a versatile talent that lady, and I’m sure you all know Kate Atherley the tech-wizard of Knitty.com.

Besides knitting there will be weaving, dressmaking, woodworking, rug hooking, bookmaking, Japanese embroidery, drawing, photography, poetry you name it!

Admire the list of teachers below and follow the links to their websites…or really…Just go to the Squam Workshops website to get a feel for the wonder of the event, and then to the specific Squam Spring 2016 for all the class descriptions, schedule etc.

Note especially that Kristine Vejar of The Modern Natural Dyer fame is teaching. WOW. Be sure to post a comment on my last post for a chance to win a copy of the book and a kit to go along with it! 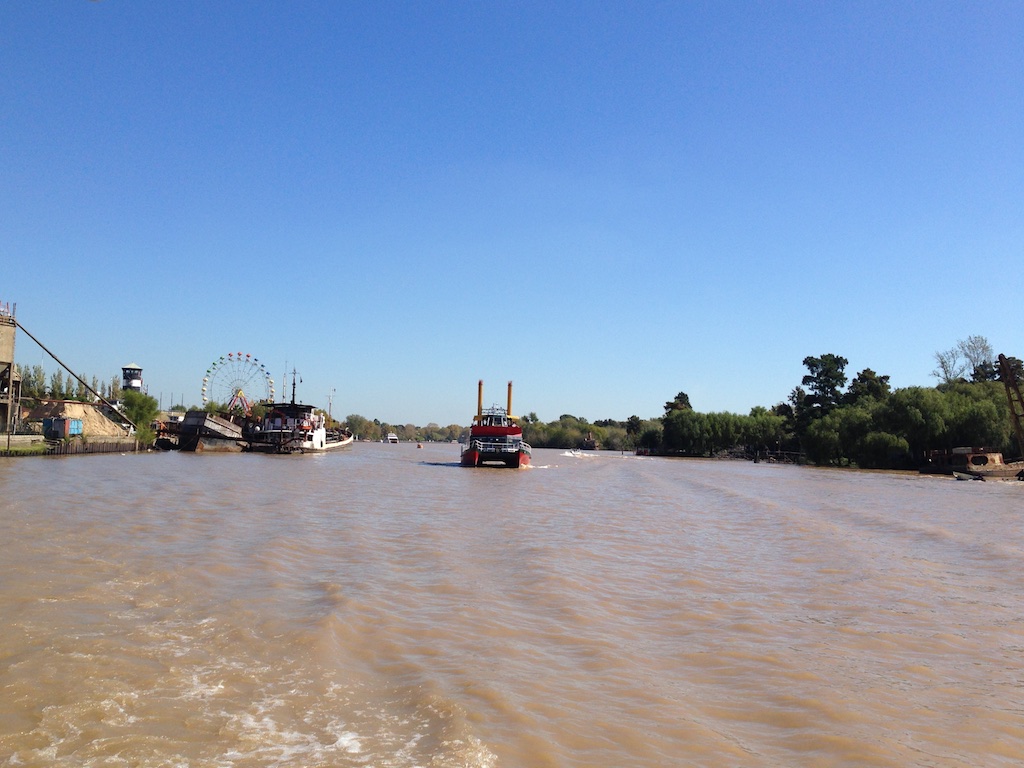 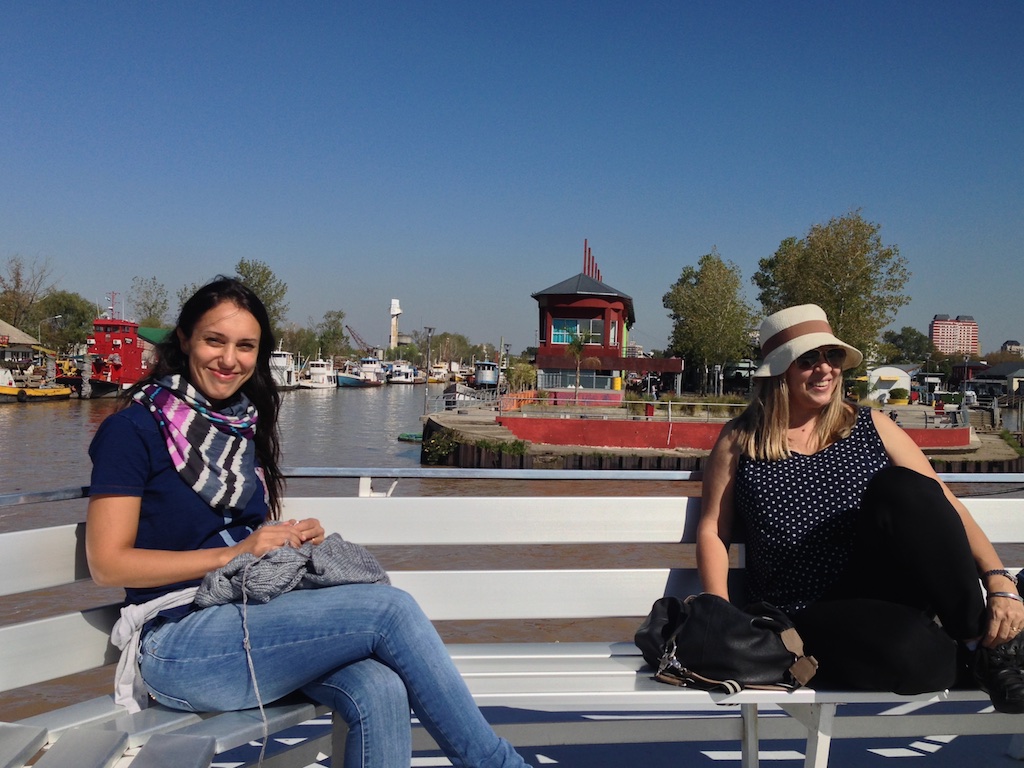 One of my favorite outings was visiting Tigre, a town just outside Buenos Aires situated on the Paraná Delta, the world’s only river delta that does not empty into the sea but into another river, the Rio de la Plata. The Paraná river system is the second largest in South America after the Amazon, and the third largest in the Western Hemisphere after the Mississippi. 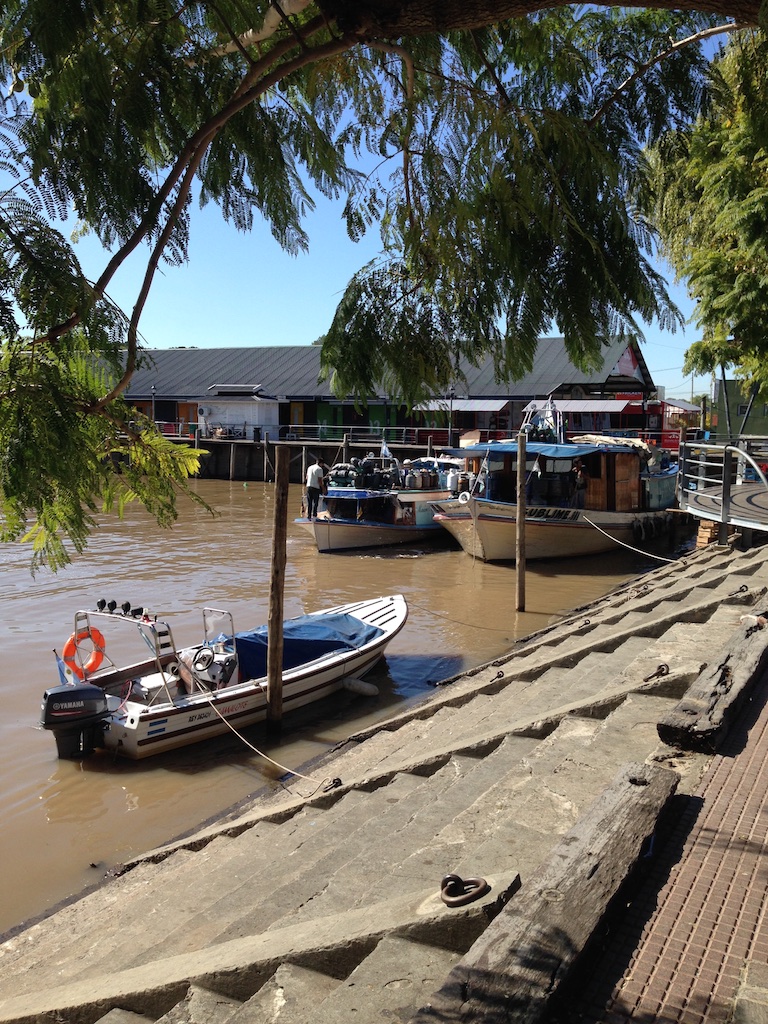 Tigre, named for jaguars that once prowled the area, is a hot tourist destination on the weekends. Joji, her mom Virginia, Ale and I were fortunate to visit mid-week and had the place to ourselves!

A nearly private boat or laucha, was our transportation – there were only two other guests, and one of them was napping!

A perfect way to idle the day away enjoying lunch at the wee onboard restaurant and knitting on top in the sun. 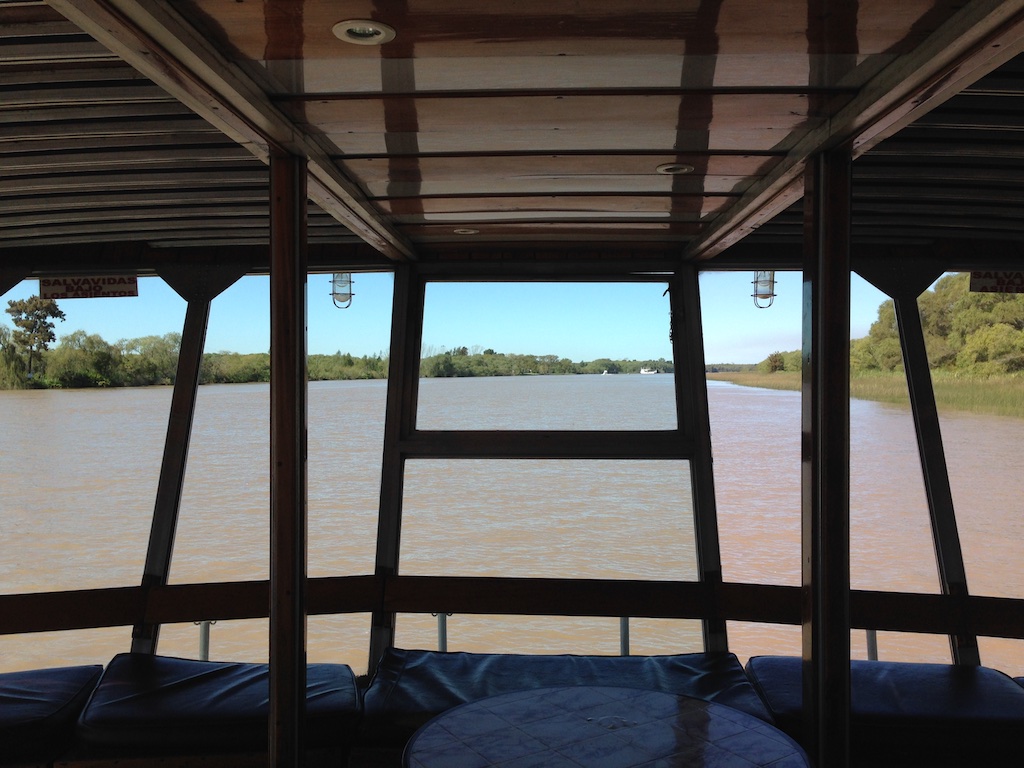 We traveled a labyrinth of waterways, among several of the thousands of little islands that make up the delta. The islands closest to the mainland are dotted with beautiful little holiday homes, each one cuter than the last.

Virginia lived there at one point; looking at the map, she could pick out where, and Ale remembered her grandfather’s swimming route. 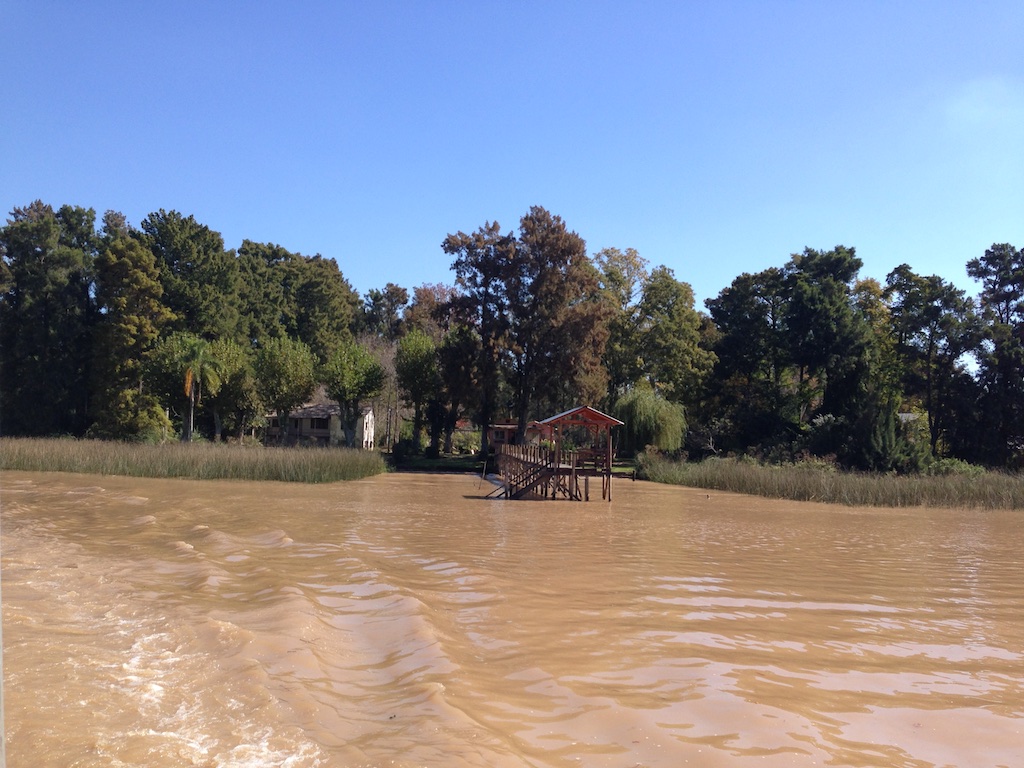 Further out the islands get wilder and less inhabited. If you live way upstream you can buy vegetables and other goods from boats that serve as shops.

It looked to me like a place to return to and stay a while. I always imagine which little house on stilts I’d choose. I’d have a fine time painting and knitting, and kayaking around the network of streams. I’m so sad I can’t find the map we got, with guest houses listed, where I will stay next time!

The mainland town of Tigre was originally organized as a port for fruit and timber exports. In the 20th-century belle époque it became an elite tourist destination. We visited the stunning, “are we in Disneyland?” Museo de Arte Tigre which is located in a former society social club built in 1912. 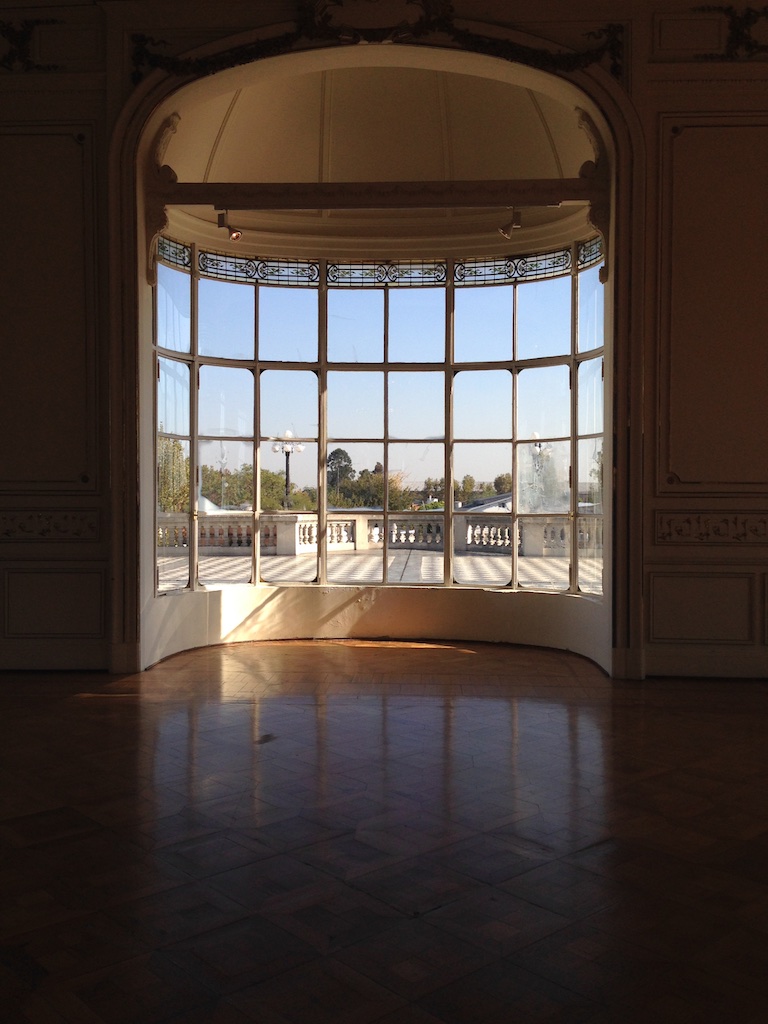 They have a nice collection of prominent 19th- and 20th-century Argentine artists, as well as a rotating contemporary art show. 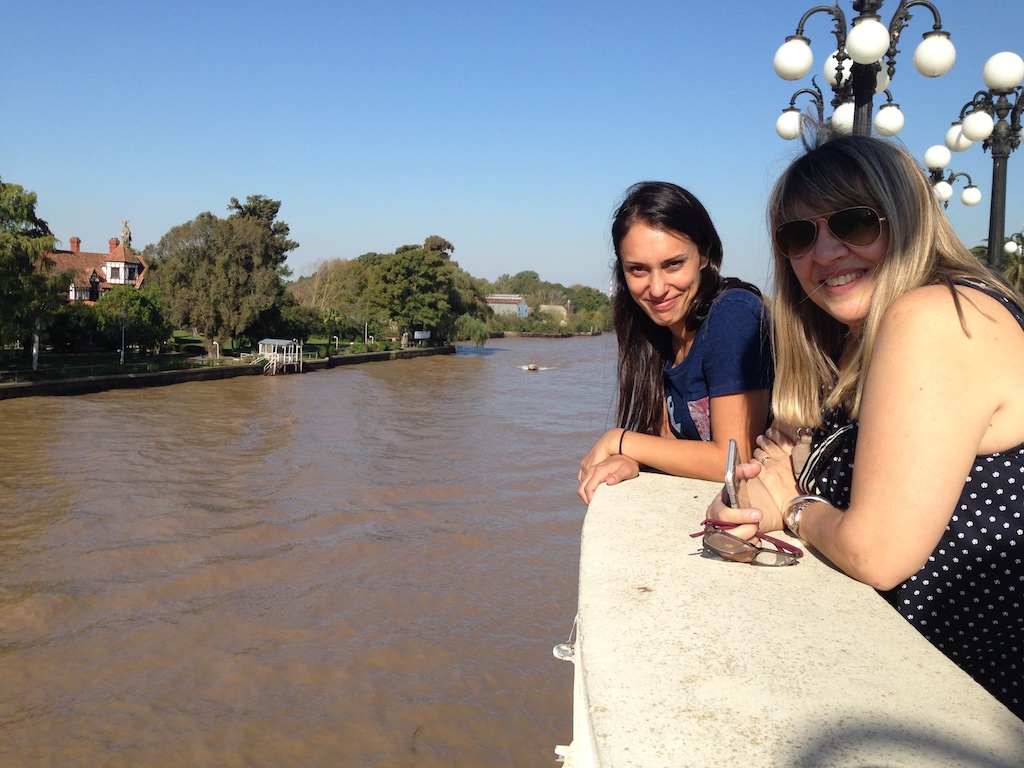 There is a market where you can buy souvenirs as well as great plant shops. Joji got a lemon tree for her new patio! 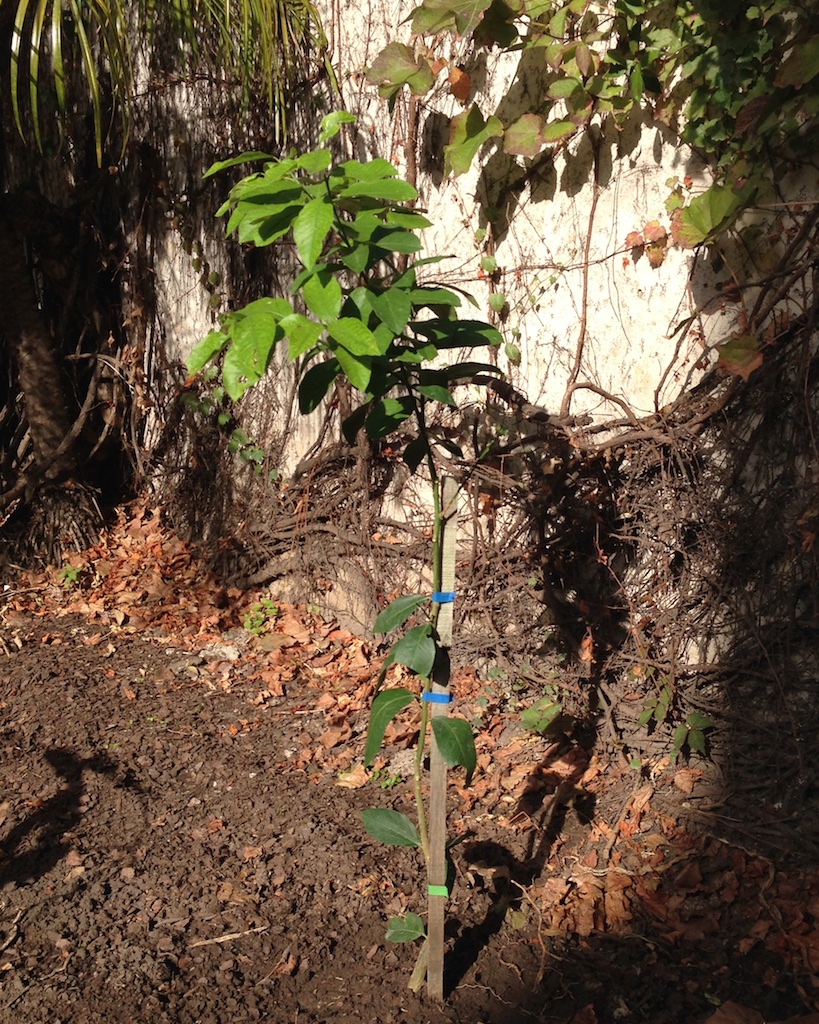 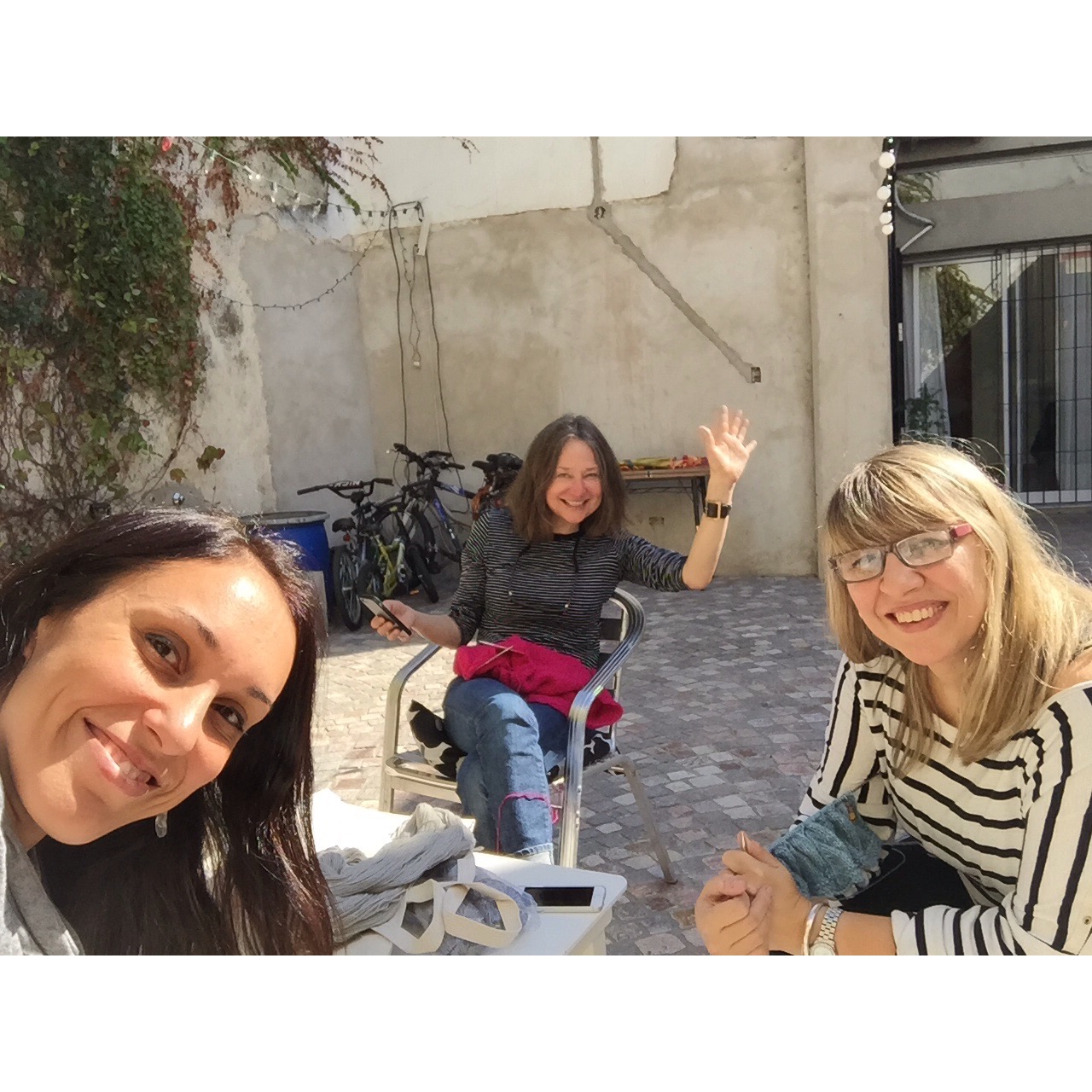 I traveled to Argentina to see my friends! And to meet new friends while serving as a group leader for Behind the Scenes Adventures Knitter’s Argentina and Uruguay.

I arrived a few days before the group so I could spend time with Joji Locatelli. A knitwear designer extraordinaire and Buenos Aires native, Joji was my city guide, translator, mate instructor, taxi driver, knitting consultant, gaucho pants finder, inspiration and so much more! What an amazing lady…what an amazing friend…I can’t even begin…and her FAMILY!!!! The best, the sweetest!  I felt so welcome and loved that I didn’t want to leave and I can’t wait to return. I also can’t wait to return the favor – I want to show them my Maine!

I was away for over a month. Before heading below the equator, I flew to the west coast of the US to teach a Vogue Knitting Live. Upon my return I briefly visited friends in New York City and then taught at Kent Needle Arts Retreat in Connecticut. I’m still a little travel-charged – and words, particularly written words are not coming out as … poetically…as I might hope. So lets just look at some pretty pictures for the next few days! 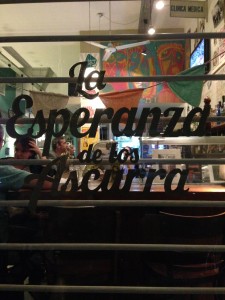 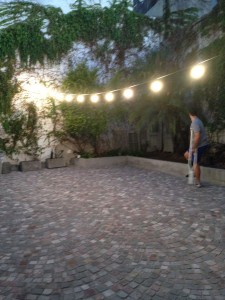 For a jumpstart and current events, check my instagram page.

Vogue Knitting Live Pasadena – palm trees, swimming pools and knitting. What perfect combination. A special treat, especially after the winter we had in the East.

Great energy – I made fantastic new friends and reunited with dear old friends. 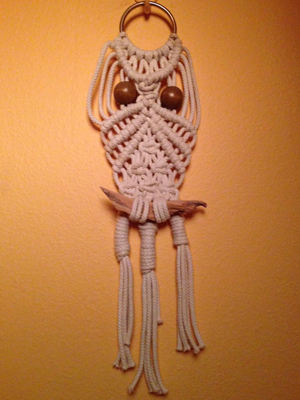 I was especially lucky to be able to visit my friend Kat Coyle’s yarn shop The Little Knittery – a hive activity and creativity. Not only knitting and crochet, Kat offers basic weaving and macrame too.

Next time I’m in California, I stay longer – get a van…a van tricked out with a little salon for knitting, just like yarn rep Mona has – Then I’ll take a road-trip-knitting-tour of the Western States!

PS: Right now I’m in Argentina with Cynthia LeCount Samake’s Behind the Scenes Adventures “Knitter’s Argentina”. I’ll be posting as best I can, though I’m having computer problems…the new “Photos” program keeps crashing. Till I get that sorted out you can follow our trip on my Instagram feed, and also on facebook.